We had such a glorious sunny summer in 2013 that we tend to forget what a slow start there was to the growing season. When we started back at the beginning of March all one could see were big expanses of bare compacted earth with no signs of new growth.

Fortunately we had a little money in the kitty and Mary Toomey asked Jason and a friend of his to dig over the garden. Jason works for club member Adrian Eggers, who owns a garden design business called Living Designs. Adrian has helped us so much in the Orchard Garden, doing much more than he has been contracted to do, and always with good humour!The first thing we did was to walk around the garden and make notes about what needed to be tackled.

We all agreed that the large patio area that the service users both sit in and look out on from their “hobby room” was very dull especially in the winter months.We bought 6 large blue pots which we first filled with polyanthus: later for the summer months we planted them up with stock and cosmos. We are in the process of buying more permanent plants which would be drought tolerant. We still have plans to do more in this area.

It was very obvious that we needed to put in structural plants in various parts of the garden and Mary” hit” the garden centres. Here are some of the trees she chose, which we planted last spring:

We also decided it was time to have an open day in the garden and show it off to the public. We wanted also to raise some much needed funds both for the Alzheimer Society and to buy new structures and plants for the garden. We also were very anxious that people would see and understand the therapeutic value of a garden like this.

We have tried to make it a garden with all year round interest. Another very important element is the sensory aspect of the plants. 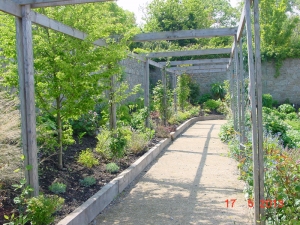 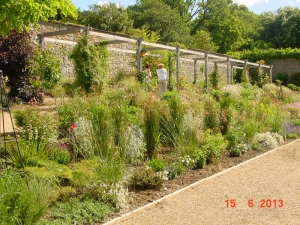 We deliberately chose many herbs, grasses, trees, shrubs and flowers which through their movement, scent, touch and association would help people to experience to the full the beauty of the garden. 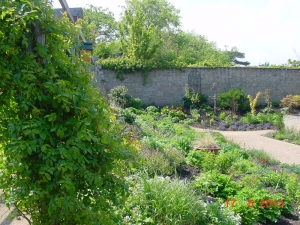 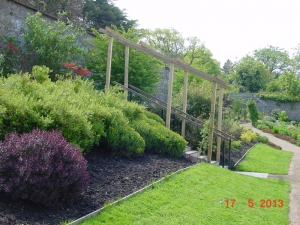 June the 15th was the date we chose, fully confident that the garden would be blooming by then. The best laid plans………. We didn’t bargain for the cold going on and on. All growth was delayed by a couple of weeks. We worked hard in the garden anyway and Mary ordered some wrought iron obelisks for the large herbaceous bed and had a pergola erected on the steps leading to the convent grounds gate. The former we planted up with sweet pea, the latter with a rose and later a clematis “Forever Friends.”

We canvassed all the club members and our friends for plants for our plant stall and publicised the open day. Mary organised a raffle and we all hoped for a fine day. In early June the weather softened a little bit and growth took off, albeit very reluctantly.

The day itself dawned bright and apart from one short sharp shower the sun shone all afternoon. We had a great turnout, including lots of club members.

Plants sold like hot cakes, the raffle went very well and that night Mary was able to settle all her IOUs for plants, garden work and structures and we had a small amount of money in hand.

We put down our heads again and went back to our regular Wednesday morning stint throughout the summer. As everybody remembers with nostalgia the weather then turned glorious and watering the recently planted trees and all the pots became a priority.

A phenomenon of the sunny hot dry weather was that everything flowered and then went to seed very quickly. As a result the best part of the herbaceous border was over by August and we had to wait until September for the grasses and asters to flower before it looked really well again. Still it was a small price to pay for that summer! 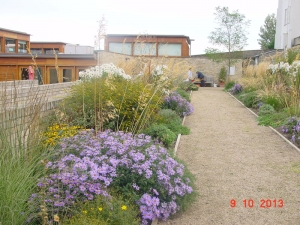 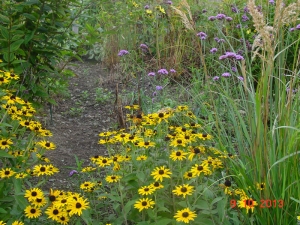 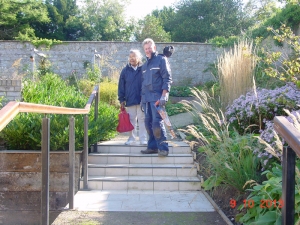 In the last few weeks of autumn as well as doing an autumn weeding and clean-up we have been making plans for next season and making a few more changes in the garden. We were always unhappy about the view from the dining room, just grass and bins! We erected a panelled screen around the bins and dug out a new bed in the grass in front of the dining room window. So far we have just moved a beautiful little “Christmas tree” into that bed and a few of the volunteers are deciding how to get fairy lights on it during December, watch this space!

We are planning to do a day in November in order to move some trees and shrubs during the dormant season. Then we really will put the garden to bed!